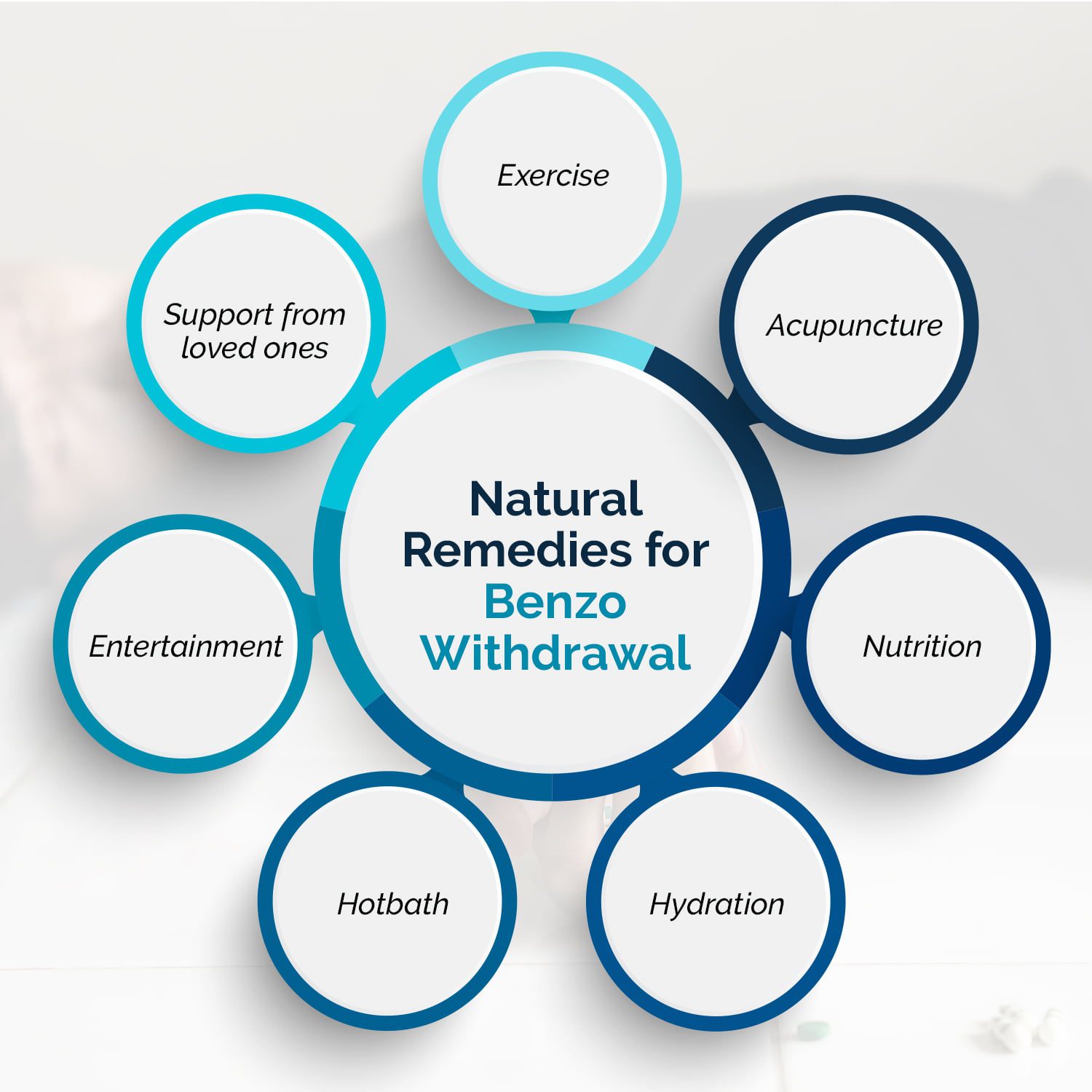 Benzodiazepine is a treatment commonly prescribed for anxiety. However, you have the risk of being entrapped in an unforgiving cycle of addiction. There are some natural remedies for benzo withdrawal that you can try out if you are a victim. In this article, we will discuss:

Benzodiazepines are a group of central nervous system depressants used in treating insomnia, anxiety, and seizures. Benzodiazepines are often called benzos, and they are among the most commonly prescribed drugs in the United States. There are various types of benzos sold under known names like Klonopin, Xanax, and Valium.

The significant difference between these drugs is the length of time they remain active in the body. Users sometimes abuse benzos because of their euphoric and relaxing effects. Even at therapeutic doses, benzos can result in physical dependence and withdrawal.

Whenever you are physically dependent on a drug such as benzos, it means that your body cannot function normally without it. If you suddenly reduce your dosage or stop, you will experience withdrawal symptoms.

An individual can manage benzos withdrawal with a careful and gradual dose reduction, which will result in milder symptoms that will come and go in waves. However, if you have been using benzos for more than six months, suddenly quitting the dosage can result in grand mal seizures and delirium. Therefore, it is often best to involve your healthcare professional in your withdrawal process, even if you are opting for the natural remedies for benzo withdrawal.

Signs and Symptoms of Benzos

Withdrawal symptoms can arise after a duration as short as one month of use, even on small therapeutic doses. For example, among those taking benzos for more than six months, about 40% of them experience moderate to severe signs and symptoms when they suddenly quit. The other 60% suffer just mild symptoms.

The level of severity of withdrawal symptoms depends on a variety of factors, such as:

The onset of benzos withdrawal relies specifically on the drug you are taking. Short-acting drugs like lorazepam (Ativan) and alprazolam (Xanax) leave the system faster than some other drugs. In this case, withdrawal symptoms can appear in as little as eight hours to half a day. Longer-acting benzos like clonazepam (Klonopin) can stay longer in the system. In this case, the withdrawal symptom can remain inactive for one to two days (or more).

Possible symptoms of benzo withdrawal include the following:

Side effects for benzos also vary according to the person taking them. Such side effects may include the following:

When you take high doses of benzos, especially in abuse, you can also experience other symptoms like euphoria, slowed reaction, irregular or hostile behavior, and mood swings.

There are certain benzos intended to have a slow release of effects. Therefore, when people take a high amount or multiple doses of benzos at once, they may not feel the impact immediately. However, the chemical builds up in the fatty tissues of the body and may lead to over-sedation, characterized by the following symptoms:

Withdrawal symptoms from short-acting benzos become extreme on the second day but improve by the fourth or fifth day. However, some people suffer the symptoms for several weeks. Estimates suggest that about 10% to 25% of chronic benzo users experience what is called protracted withdrawal. Protracted withdrawal is often a long-term syndrome that comes and goes for several months.

The Drug Enforcement Agency (DEA) considers benzodiazepines as a Schedule IV controlled substance. Drugs under the Schedule IV classification have a low potential for abuse and low risk of dependence. However, a 2018 analysis also revealed that drug misuse accounts for about 17% of benzos use among adults in the United States alone. Unfortunately, only a few of them have tried the natural remedies for benzo withdrawal.

Further severe withdrawals or reactions may also be more likely when you take potent drugs, either for long periods or with other types of medication.

The dependence on benzo occurs similarly to how it does with other addictive drugs. Physical dependence may start in just a few weeks, even while taking the medication in low therapeutic doses as prescribed by the physician. Therefore, when using benzo, it is not advisable to suddenly stop it, resulting in a hazardous side effect.

Support from Loved Ones

Exercising the body has shown positive effects on mitigating symptoms associated with benzo withdrawal. Exercise does not only eases withdrawal symptoms but also decreases cravings. Exercising the body has also helped to promote abstinence from substance abuse. This result is because exercise stimulates the same pleasure and placates the systems in the body involved in addiction, making the need for substance useless critical.

Exercise can also help get rid of feelings of anxiety or depression that may be associated with physical withdrawal symptoms.

An exercise is an excellent form of distraction from discomfort because it gives the person exercising something to focus on besides withdrawal symptoms. In the moment of exercise, the person will most likely forget about the difficulty of detox for some time, making it easier to tolerate the symptoms. However, a person who is exercising to help manage the withdrawal symptoms should not push themselves too hard.

According to Acupuncture in Medicine, acupuncture is more likely to have positive results when reducing withdrawal symptoms instead of abstinence. This result is an indication that acupuncture can be quite valuable in helping to deal with withdrawal symptoms. Unfortunately, some people are uncomfortable with needles and may disregard the process of acupuncture because of that. But other similar methods can provide almost the same remedies. Such alternative therapies include acupressure or even massage.

One of the ways substance abuse harms the body is by taking away the body’s ability to absorb and use certain nutrients. This explanation is why some substance abuse can affect a person’s appetite. These issues can be a nutritional deficiency, which plays a significant role in the symptoms of withdrawal. The following are great details concerning nutritional deficiency:

These issues concerning nutrition can worsen withdrawal symptoms. To ease these symptoms, you should eat healthy meals more, although it may be difficult for someone suffering from nausea. Vitamins can be a supplement for nutritious meals to ensure that the person is receiving adequate nutrients. In trying to eliminate the withdrawal symptoms, do not attempt to engage in anything that may worsen rather than alleviate the symptoms. You can eat a lot of vegetables and fruit too – they work wonders.

When sweating, vomiting, and diarrhea symptoms occur during withdrawal, the dehydration that follows can be another level of added discomfort, and it may worsen other symptoms. Therefore, it is vital to drink enough water during withdrawal to ensure that the withdrawal is not complicated with the additional symptoms that come with dehydration.

You can ease pains and aches by maintaining adequate hydration. You can also encourage further hydration by drinking specialty beverages with electrolytes; an example includes sports drinks. These drinks can help support the body’s potassium and sodium balance through the entire withdrawal process. Always stay hydrated as much as possible.

In some cases, a hot bath is the best remedy for achy muscles, agitation, insomnia, and anxiety. This will help a lot during the process of drug withdrawal too. The hot water can help relax these symptoms, especially when you add Epsom salt to the bath.

In the case of fever or a racing heart, however, baths should not be used. Rather than a warm bath, a heating pad is a better alternative for that kind of situation. The heating pad will provide the warmth needed without exposing yourself to the risk of worsened symptoms. Generally, keeping the body warm can be both soothing and relaxing during withdrawal.

In some cases where symptoms continue to surface and everything possible has been tried in easing them, distraction could be the only solution needed to manage the lingering discomforts. When this is the case, engaging in activities that will keep one’s mind off the symptoms and pains may be the perfect recourse.

Listening to music, watching movies, and spending time with loved ones can provide this needed distraction. Engaging in entertaining stuff that can bring about laughter is indeed healing. Laughter can cause the body to release endorphins that reduce pain and counteract cravings for substance abuse.

7. Support from Loved Ones

Anyone suffering from benzo withdrawal symptoms needs loved ones around them because these friends and family give comfort and solace. Their presence alone is a great distraction from any pain or discomfort, which is necessary for their general health. Their supports are also a great motivation to help the individual make it through the withdrawal stage. They are there to offer persuasion and reminder to keep up with the practices already mentioned above. Friends and family will help an individual suffering from benzo withdrawal recover a lot faster than any other natural remedy already explained.

Benzodiazepines are potent drugs that can be pretty effective in the short term. Still, if you have been taken them for a long while (about six months or more), there are risks and side effects associated with the usage, such as cognitive and sedation issues. For many people, quitting benzodiazepines feels like waking up from a long dream; whether the dream is pleasant or terrible depends on the user.

The fact is that waking up is not easy at all. Therefore, to achieve your best health, it is better to talk to your physician about the best way to quit and how you can achieve long-term success while trying the natural remedies for benzo withdrawal.

What Supplements are Suggested while Benzo Withdrawl?

Protein-rich foods, fresh fruits and vegetables, and their smoothies with coconut water are some proven helpful supplements during benzo withdrawal. Sugar, Cookies, candy, and chocolate are to be avoided as any addition in smoothies.

What are the Common Symptoms of Benzo Withdrawal?

Dizziness, Cramps in the abdomen, unstable thinking, anxiety, neck pain, etc., are a few of the most common symptoms of benzo withdrawal.