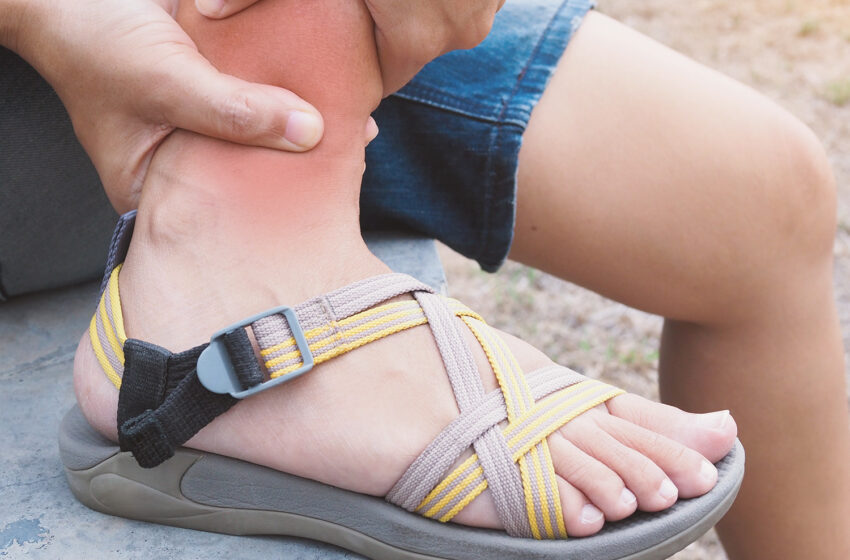 Pseudogout has a close similarity to gout in many ways, and, like pseudogout, gout can also cause arthritis. Where gout is the real deal, pseudogout means ‘false gout’, a name generated due to its similarity to gout. On some occasions, pseudogout coexists with gout. This means that the two crystals can appear in the same joint fluid. Pseudogout is a painful medical condition that often needs urgent treatment. Treating this condition can be expensive, but pseudogout natural remedies will provide you with the relief you need. Follow this post to learn how you can deal with your pseudogout without having to visit the hospital.

Pseudogout is a kind of arthritis that creates painful, spontaneous swelling in your joints. Pseudogout develops when crystals gather in the synovial fluid, which is responsible for lubricating the joints. When this process occurs, a person will experience pain and inflammation.

Pseudogout most often affects the knees, but other joints can also suffer from is as well. Adults above 60 years old are more prone to developing pseudogout.

You can also refer to pseudogout as a calcium pyrophosphate deposition (CPPD) disease.

The Difference between Pseudogout and Gout

Both gout and pseudogout are types of arthritis, and they both result from the accumulation of crystals in the joints. While pseudogout results from calcium pyrophosphate crystals, gout is a product of urate (uric acid) crystals.

A person develops pseudogout when calcium pyrophosphate crystals form in the joint’s synovial fluid. Crystals can also appear in the cartilage, where they can cause some significant damage. When the crystal in the joint fluid builds up, acute pain and swollen joints occur. Scientists and researchers cannot confidently tell the reason for the forming of the crystal; however, the chance of these crystals forming increases with age. The crystal forms in about 50 percent of people above 85 years old. However, this does not mean that they automatically have pseudogout.

Pseudogout can often be an ancestral condition; that is, it can run in the family – that is why many researchers believe it is a genetic condition. Other contributing factors to pseudogout include:

Pseudogout is associated with the presence of calcium pyrophosphate dihydrate crystals in the joint affected. These crystals increase as people age, and about half of the population of people aged 85 and above have these crystals in their joints. However, most people with these crystal deposits never develop pseudogout. The reason why some people have the symptoms and others don’t is still unclear.

The following are factors that can increase your risk of developing pseudogout:

In some situations, the crystal deposits available in the synovial fluid cause permanent joint damage. Joints already affected by the condition can eventually develop bone spurs or cysts, which are growths that stick out on the bones. Pseudogout may also cause loss of cartilage.

The knees are the most common body parts affected by pseudogout, but the condition can also affect the elbows, wrists, and ankles.

The most common symptoms of pseudogout include the following:

If your doctor believes that you have gout, they may ask you to undergo the following test:

Observing the crystals in the joint cavities will help your doctor make a proper diagnosis.

Pseudogout shares symptoms with other medical conditions, so it is easy to misdiagnose it as:

Sometimes, pseudogout may not attack alone; it can come in association with some other medical conditions, such as: 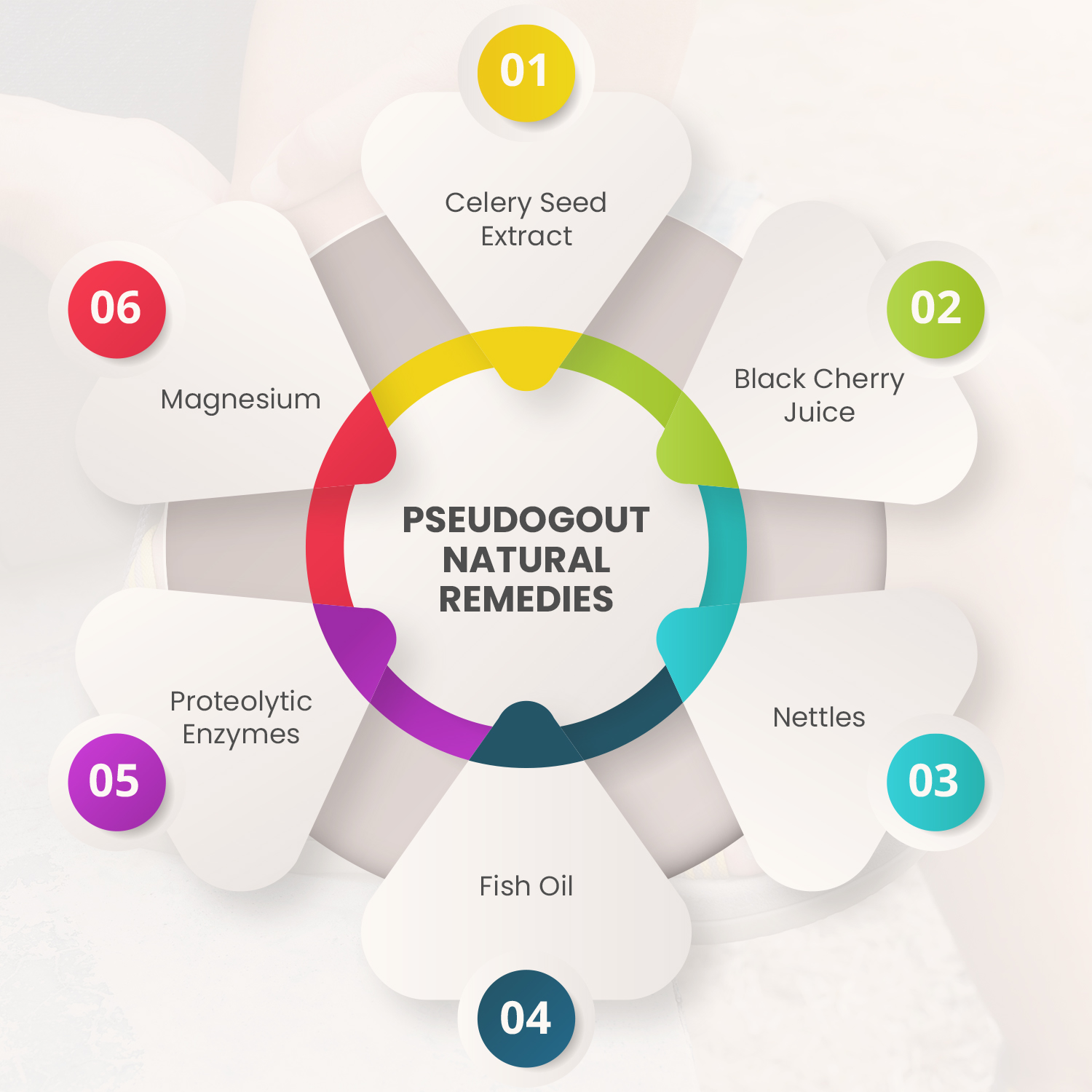 While it is relatively impossible to prevent the development of pseudogout, you can find treatments to relieve the pain and reduce inflammation. Also, treating the underlying condition that causes the disease may slow down its development and reduce the severity of symptoms. You can choose to gain relief from pseudogout by trying out some home treatments for pseudogout that may be effective for granting you relief and comfort. The following are pseudogout home remedies.

Studies have indicated that many of the dietary items we consume may result in pseudogout in the long run, but these studies are not final. Changing your lifestyle and diet may significantly help relieve you of the pains from pseudogout.

The first step is to take enough celery juice and celery seed extract because the seed extract can reduce uric acid buildup in the body. In addition, studies have shown more than a dozen different kinds of antioxidants responsible for the benefit of celery – they include phenolic acid as ferulic acid and caffeic acid, including flavonols like quercetin. This is why celery is effective for treating a wide range of conditions worsened by inflammation: urinary tract infections, irritable bowel syndrome, skin disorders, kidney and liver infection, pseudogout, joint pain, etc.

You can buy a celery seed extract supplement or the seed extract itself. You can also produce celery juice by using a vegetable juicer. But the easiest way to use it is to eat the celery throughout the day.

Nettles are a potent anti-inflammatory phytonutrient you can easily purchase in tea form. Whether you buy nettles as a tea or as a supplement, it is an excellent remedy for pseudogout

Even though fish oil does not act as speedily as celery and black cherry juice, it does not mean that it’s not as effective. Over time, fish oil can reduce your risk of developing pseudogout. One of its health benefits is its abundance of omega-3 fatty acids that decrease disease-causing inflammation in your body. Since pseudogout is a form of arthritis and fish oil is an excellent treatment for arthritis, it only makes sense that the omega-3 it contains will benefit people suffering from the condition.

When it comes to supplements, proteolytic enzymes such as bromelain can be effective against pseudogout. Bromelain is in the core of a pineapple, and it’s a digestive enzyme that is excellent for reducing inflammation and uric acid.

Magnesium is a pretty crucial mineral for the treatment of pseudogout. Magnesium is an alkaline mineral capable of decreasing the formation of crystal deposits and uric acid in the body. If your body is magnesium-deficient, you may be susceptible to developing pseudogout; that is why it will be an excellent idea to incorporate magnesium-rich foods into your diet. You can also get the magnesium supplement as an added remedy.

Besides the pseudogout natural remedies already mentioned, you also need to get rid of conventional meats, some grains, sugar, and excessive alcohol.

The Best Diet for Pseudogout

If you want to reduce the symptoms associated with pseudogout, diet is an essential remedy. Follow this diet for fast relief from the discomfort that comes with pseudogout.

While the foods mentioned above can give you relief from the pain associated with pseudogout, you should keep away from the following foods to avoid worsening your condition:

Most sufferers of pseudogout opt for pharmaceutical treatments by ingesting many drugs and medication, but many of these drugs do not really work for pseudogout. Instead, they leave you with acute side effects that aggravate rather than alleviate your condition as opposed to pseudogout natural remedies that have little to no side effects. The following are some of the side effects of these drugs:

Since there are pseudogout natural remedies, it is often better to try them before going for pharmaceuticals. However, it is best to follow your doctor’s advice, for they know exactly what kind of treatment you need based on your medical history. In the meantime, you should consider the following additional tips against pseudogout:

What Essential Oils are Preferred For Pseudogout?

Is there any Natural Herbs Good for Pseudogout?

Bilberry, Agrimony, Bromelain, Chamomile, etc., are some of the natural herbs that help prevent and minimize the pain of Pseudogout.

What are the Common Symptoms of Pseudogout?

Swollen Joints, Sever Pain, Red Skin around the Joint, etc., are some of the most common symptoms of Pseudogout.