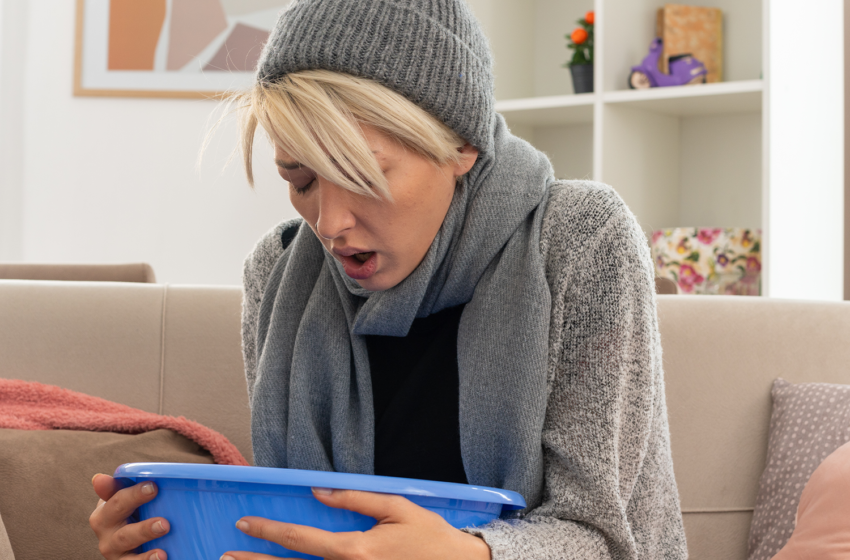 Situations will happen that will cause us to vomit. It’s usually an uncomfortable event that happens because of an underlying cause. Vomiting may persist at regular intervals if not addressed quickly. Knowing the source of the vomit is important to know how to get rid of it.
In this post, you will learn about the meaning of vomiting, the types, stages, causes, symptoms, prevention, and some home remedies to get rid of vomiting.

Vomiting is a violent expulsion of stomach contents through the oral cavity. It often begins with nausea, which is a feeling of vomiting to the point of vomiting. It occurs when the body senses an irritation and responds by emptying the contents of the stomach. It occurs in both children and adults.

In babies, vomiting can be divided into three. They are:

In most cases, vomiting is normal. When a mother feeds her child, and a small portion of the food (milk) is expelled after the feeding, we can call it a possetting vomit.

Reflux vomiting occurs as a result of a loose distal esophageal sphincter. It usually occurs when the baby has just finished eating. When a baby drinks through the mouth, it travels from the esophagus to the stomach and stays there temporarily. Because of the loose sphincter, the child belches slightly, not violently, and the food is then spat out into the mouth. This is called reflux.

The following types of vomiting exist in adults:

Retching is also known as dry heaves. They occur when a person has a feeling of vomiting and does not vomit. The body assumes the position of wanting to throw up, with the diaphragm, airways, and the abdominal walls contracting. However, there is no vomiting. This can happen due to excessive high-intensity exercise, alcohol consumption, Gastroesophageal Reflux Disease (GERD), etc.

Hematemesis is when a person vomits blood. Whenever you notice that a person is starting to vomit blood, it is very important to see the doctor. Backflow of blood from the stomach usually results from underlying diseases such as internal bleeding, gastritis, acute liver failure, etc.

Bile is a secretion that helps in the breakdown of fats and the absorption of fats in the duodenum of the small intestine. Bile is produced in the liver, stored in the gallbladder, and secreted into the small intestine. It has a greenish-yellow color.
If your stomach is empty and you are still vomiting, you will be vomiting bile. Vomiting bile can result from excessive alcohol consumption, reflux of bile (into the stomach and, in some cases, the mouth), and intestinal obstruction (when liquid, gas, or digestible food cannot pass through). of the intestine. This requires immediate medical attention.

Stool vomiting is not common but can occur. It’s when a person vomits their feces. This is due to either an intestinal bowel obstruction (which can be a partial or complete blockage preventing the movement of food particles into the colon) or a paralytic obstruction (when the muscles responsible for contracting the bowel and food particles are paralyzed and unable to do so) that allows food to be transported back to the colon.

There are three phases of vomiting. They include:

The pre-ejection phase is known as the nausea phase. In this phase, both the sympathetic and parasympathetic nervous systems are active. This phase is characterized by an increased heart rate causing a rapid heartbeat, increased respiratory rate causing rapid breathing, sweating, increased salivation, unusual pallor, retrograde contraction, and stomach relaxation.

The Retching phase comes after the pre-ejection phase. During the reaching phase, there is an action on the abdominal muscles, the intercostal muscles, and the diaphragm. They all contract, but there is still no ejection of the actual vomit. This is because they contract in preparation for the actual vomiting.

In the ejection phase, we have the actual vomiting, and that’s where a vigorous ejection of the stomach’s contents takes place. It is characterized by intense contraction of the diaphragm and abdominal muscles, pyloric contraction, and relaxation of the esophageal sphincters.

Below are the causes of vomiting:

Food poisoning is also known as a foodborne illness. It occurs as a result of eating contaminated food. Bacteria (especially Staphylococcus aureus) shed their toxins on spoiled or unhygienic food. Eating this type of food causes food poisoning, which leads to vomiting.

Viral gastroenteritis, also known as the stomach flu, is the inflammation of the inner lining of the gastrointestinal tract resulting from contamination. It can be spread through contact with an infected person’s fluids or through poor hygiene, such as not washing hands after using the toilet. This contamination leads to the irritation of the gastrointestinal tract leading to vomiting.

Congenital pyloric stenosis occurs in babies younger than 3 months. Pyloric stenosis is the narrowing caused by blockage of the muscular valve that connects the stomach to the duodenum of the small intestine. This leads to the forceful expulsion of food in babies, which is vomiting.

Vomiting is one of the symptoms of pregnancy. This is known as “morning sickness”. Vomiting during pregnancy is due to hormonal changes. However, there is an extreme case of vomiting in pregnancy known as hyperemesis gravidarum. Hyperemesis gravidarum causes the pregnant woman to vomit up to four or more times a day, leading to dehydration and weight loss.

Indigestion is also known as dyspepsia, which means an upset stomach. Indigestion occurs when your digestive system cannot break down food from its large molecule. It comes with a feeling of fullness accompanied by gas and belching. It occurs as a result of overfeeding, eating fatty foods, eating very quickly, etc. Indigestion leads to the violent expulsion of food particles known as vomit.

Motion sickness is a feeling of nausea and wooziness at the beginning of a journey that involves travel by road, air, rail, or water. It is accompanied by dizziness, lightheadedness, nausea, and vomiting. This occurs as a result of conflicting signals confusing your brain and causing the symptoms you feel.
Others include:

You will notice the following symptoms when you are about to vomit:

To prevent vomiting, it is important to follow the principles below:

Eating small portions frequently is much better than eating a large amount at once. Overeating causes the stomach to expand beyond normal, resulting in stomach pressure accompanied by a feeling of fullness. The food stays in the stomach longer and the speed of digestion is reduced. This causes discomfort and the body may respond by vomiting.

Eating spoiled and expired food causes contamination known as food poisoning. This causes an upset in the stomach and leads to vomiting. Eating spoilt food does more harm than just filling up your stomach. Therefore, it is important to stay away from spoilt food.

When you drink alcohol, the body has trouble breaking it down and it is seen as excessive work. To get rid of toxins ingested from drinking alcohol, the body responds with vomiting. If you avoid alcohol or reduce your consumption, you are doing yourself a lot of good. It not only prevents vomiting but also other related health problems like liver disease, high blood pressure, stroke, etc.

Home Remedies To Get Rid of Vomiting

The following are the home remedies to get rid of vomiting:

Ginger is known to have many benefits. It is used as a home remedy for a variety of diseases. Ginger helps get rid of vomiting during motion sickness by keeping the digestive system stable, which helps relax the gastrointestinal tract and prevent vomiting. The main compound in ginger that helps get rid of vomiting is gingerol and shogaol. They work by helping to improve gastric emptying, and also to improve digestion. Ginger also plays an important role during pregnancy by eliminating vomiting. It can be taken as ginger tea by peeling and cutting into hot water and drinking 4 cups (950ml) per day. Studies have shown that higher dosages are ineffective.

Lemon contains bicarbonate, which helps reduce symptoms of vomiting. Lemon juice also helps get rid of accumulated mucus lodged in the digestive tract and allows food to move freely. If you vomit, you can also inhale the lemon flavor. Inhaling this lemon flavor will help calm your system and prevent feelings of nausea that lead to vomiting.

If you find yourself vomiting, it is better to stop eating solid food for the time being. After vomiting, try sucking ice chips intermittently for about 4 hours. In the next few hours, you can drink clear liquids such as water or apple juice. You can then continue taking fruit before you start eating again.

Baking soda is a base that helps neutralize the acidity in the stomach when we’re about to throw up and helps relieve the symptoms of vomiting. Mix 1/2 teaspoon of baking soda with 4 ounces of water and drink.

Cloves support digestion and help get rid of vomiting due to indigestion. It can be ingested by chewing it raw, adding it to hot water, and allowing it to warm before drinking. It can also be added to a cup of tea.

Rice water is used to get rid of vomiting caused by gastritis, which causes the lining of the stomach to become inflamed. Rice water had been shown to drastically relieve stomach upset as well. All you have to do is boil a cup of rice in 4-6 water and strain the rice. Let it cool down. You can put it in the fridge for a quick result. Drink about 2-3 cups of rice water (you can add honey to sweeten it).

The above measures are for immediate relief from vomiting. It should reduce or eliminate your vomiting. However, if the home remedies for vomiting do not work, it is very important to see your doctor as soon as possible to avoid any danger.

What Supplements Can Overcome Vomiting?

Ginger, Lemon Slice, Salty Water, Fennel Seeds, Cloves, etc., are some of the proven and effective measures per research papers to overcome nausea and vomiting. These supplements are easily available in any vegetable or grocery store.

Is Peppermint Good For Vomiting?

Yes, With its relaxing and claiming properties, it helps to relax the stomach muscles and makes food frequently move through the stomach. Peppermint in hot water or tea is the common method for its intake. It is also available in capsules if you are not willing to drink it.

What Causes Vomiting in Children?

Some of the common causes for vomiting in children are Food poison, Food allergy, UTI, Appendicitis, Coughing, Viral gastroenteritis, or there might be other serious causes, so if the vomiting is frequent, then it’s better to visit the doctor.