Parkinson’s disease is a neurological condition affecting 1% of adults over 60 years, although it affects some young people on rare occasions. It is the 2nd commonest neurological disorder affecting the old, the first being Alzheimer’s disease. It is known as “The shaking palsy”. This is because the condition is associated with shakiness and tremors.

The disease is named after a British doctor who wrote the first book about the condition, making people name the condition after him. It is a progressive disease, but the symptoms can be managed, and lifestyle can be improved. Although there hasn’t been an effective way to tackle the cause of the problem completely, it is possible to slow down the progression of the disease and prevent it from causing damage.

The disease is challenging, as it affects the daily activities of the person affected. This disease may progress to depression, which may lead to sleeping disorders, and affect the cognitive function of the person involved. This is why we need to eliminate disease and its associated symptoms.

What Is Parkinson’s Disease?

Parkinson’s disease is a progressive neurological disorder that causes the degeneration of nerve cells in the brain and is characterized primarily by bradykinesia, rigidity, and tremor. It leads to balance disorders. Over time, it can also affect mental health, thinking ability, etc. Parkinson’s disease is associated with the death of dopamine neurotransmitters in the brain. 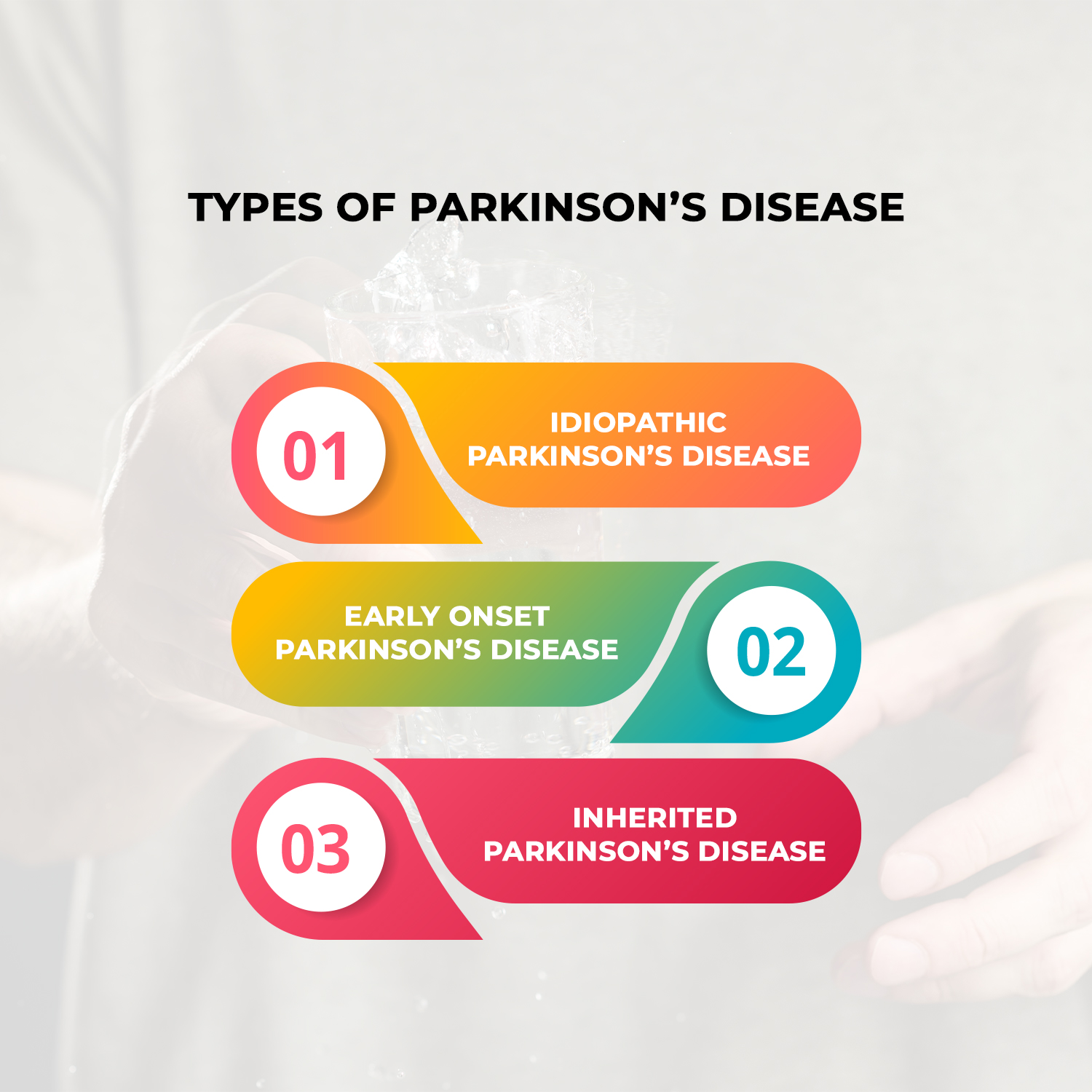 There are 3 major types of Parkinson’s disease. They include:

The following are the causes of Parkinson’s disease:

There are five stages of Parkinson’s disease. They include:

In this stage, mild symptoms are seen. The disease does not interfere with normal daily activities. There are mild changes when walking, in facial expressions, and the normal body posture. Symptoms occur on one side of the body and do not affect the other side. It is so mild that the person might not even notice until someone else points it out.

In this stage, moderate symptoms are seen. Symptoms are more seen, and the person begins to feel these symptoms on both sides of the body. Normal daily activities can still be carried out by the person but may be more difficult and take longer. This is due to stiffness in muscles and happens progressively. Balance is not impaired at this stage, but postures change continues to progress at this stage.

This stage is known as the middle stage. In this stage, the balance begins to get impaired, and the person affected may experience falls. Movements become slower, but people might still be able to perform some daily activities, but it is done very slowly. Activities such as dressing up, bathing, and eating may be impaired.

Symptoms start getting severe at this stage, and a person cannot live independently. This is because the person cannot perform daily activities alone. The person can stand without support but cannot walk without an assistive device because of a consistent fall.

This is the most advanced stage of Parkinson’s disease. There is pronounced stiffness, which makes standing difficult and causes frequent falling. At this stage, there is cognitive impairment, and it is associated with dementia, hallucinations, sleep disturbances, etc. The person is also bedridden and requires a wheelchair for movement. This decreases the quality of life of people at this stage, but with proper treatment, they can manage it very well.

People suffering from Parkinson’s disease have a particular gait or walking pattern, especially in later stages. It is characterized by small shuffling steps that cause a reduced walking space known as stride length. A person walking with a Parkinsonian gait tends to lean too forward when walking. This is known as a stooped position, with the head forward, shoulder down, hip bent, and knee bent. There is also a reduction in the swinging of arms, especially in the most prominent limb.

The following are the symptoms of Parkinson’s disease:

Bradykinesia is one of the cardinal signs of Parkinson’s disease. It is known as slowness of movement. When the person wants to perform any movement like standing up from a chair, the task that is about to be performed becomes time-consuming.

Rigidity is the second cardinal sign of Parkinson’s disease. Rigidity is the presence of muscle stiffness. This limits the range of motion and makes it difficult to move. The stiffness can also come with pain.

Tremor is the third cardinal sign of Parkinson’s disease. It is known as rhythmic shaking and usually occurs when the body is at rest and goes away with movement. This is why it is called a “resting tremor”. It starts from one side of the body, right from the hand or fingers, and then to the leg or feet and may also affect the jaw. The tremor might affect only one side in some and may also proceed to the other side of the body in others.

A person suffering from Parkinson’s disease may experience problems with balance and posture. In terms of balance, the person experience falls when trying to walk and finds it difficult to control it. The posture changes from normal erect standing to stoop standing.

There will also be changes in the way the person speaks. There may be the presence of slurred speech or unusually quiet tone, it may be sometimes hoarse tone, and they are usually unable to convey emotions.

Parkinson’s disease also causes micrographia, which is an unusual reduction in the size of the writing, and this cannot be controlled, especially when writing for a lengthened period.

In Parkinson’s disease, involuntary or unconscious movements such as blinking, smiling, etc will be difficult to perform.

In Parkinson’s disease, there will be difficulty swallowing, which causes saliva to accumulate in the oral cavity. If there isn’t swallowing, it will lead to excessive drooling.

The following are the complications of Parkinson’s disease: 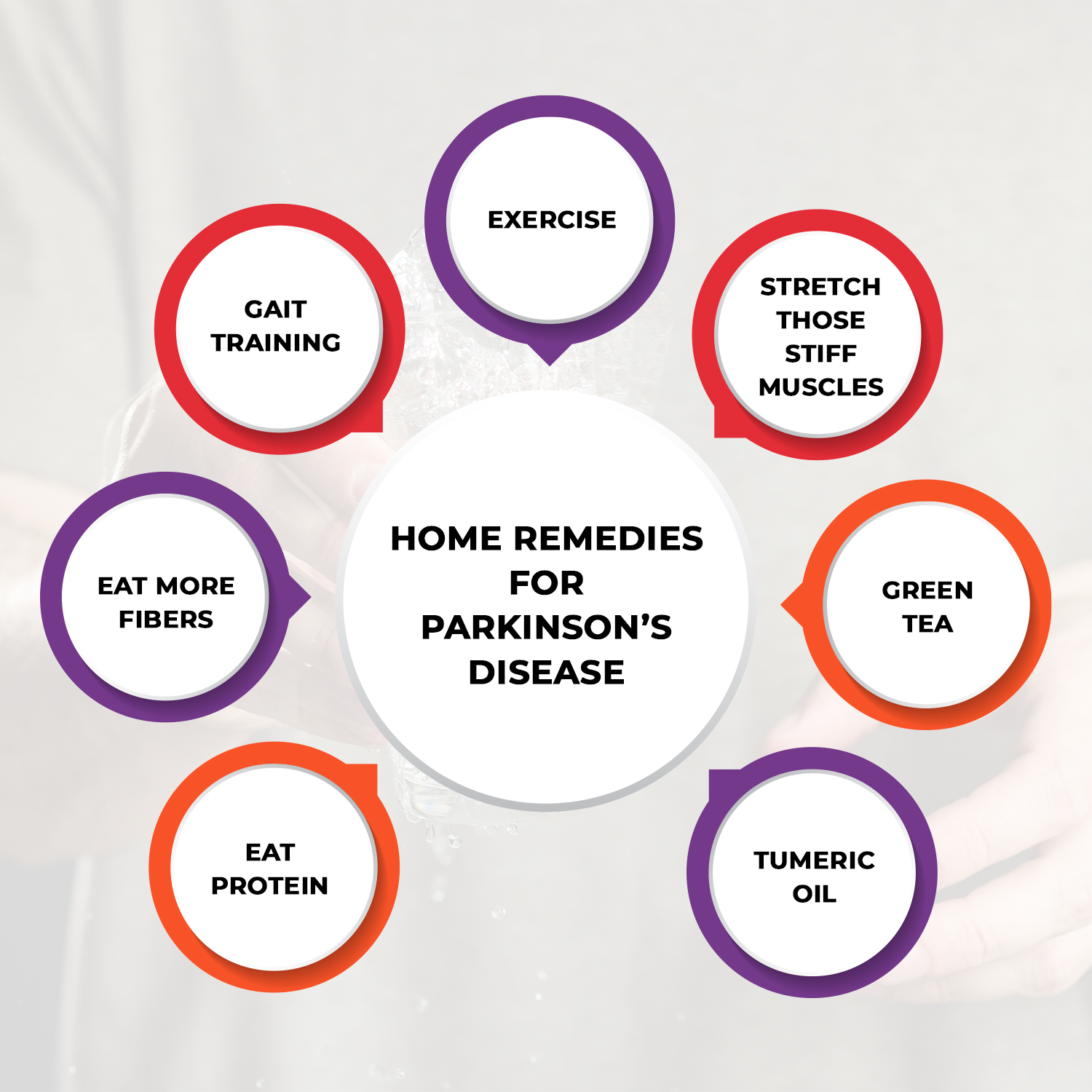 At the onset of Parkinson’s disease, it is good to start daily exercise to strengthen muscles. It also helps to maintain flexibility for rigid muscles, improves balance, and helps to limit depression. You can engage in exercises like aerobic exercises, resisted active exercises, yoga, swimming, Tai chi, and so on. You can also organize an exercise plan with a physical therapist. This will give it a professional touch.

Stretching stiff muscles is one of the ways by which Parkinson’s disease can be gotten rid of. It helps to relieve movement difficulties like walking. It also helps to improve balance and posture. You should ensure you stretch your body about three to four times a week. You can do ten minutes each day, but you can also rest in between those times. Ensure that you are breathing in and out during this period.

Green Tea contains polyphenols, which help to prevent dopamine from neuronal loss. This works by inhibiting the action of a pathway that is associated with the degeneration of the neural cells that causes Parkinson’s disease, known as the ROS-NO pathway.

Turmeric oil is one of the ways by which Parkinson’s disease can be taken care of. It contains r-turmerone, which provides anti-inflammatory effects in response to Parkinson’s disease, and helps protect against dopamine neurotransmitters’ degeneration.

Protein is good for a person with Parkinson’s disease. This is because eating protein helps to prevent muscle wasting and weight loss. It also helps to facilitate wound healing and increase disease resistance. It is, however, important not to take it in high quantity but in a moderate quantity. The proper thing is to eat a balanced diet.

Eat more foods rich in fibers and vegetables. This is because persons suffering from Parkinson’s disease have a risk of having constipation. Eating food high in fibers helps to combat this risk. So it is also important to eat vegetables and fruits.

Gait training is one of the home remedies for Parkinson’s disease because it helps to improve balance. It does this by reducing the risk of falls and helps to correct the Parkinsonian gait pattern, thereby improving ambulation.

What Medicines are Best For Parkison’s Disease?

There is no cure for Parkinson’s, but medications can help. Your doctor can suggest medications like rasagiline, which may be most effective with other treatments.

What Herbs are Best For Parkison’s Disease?

What Causes Parkison’s Disease in Children?